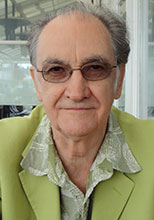 An extract from the nomination letter reads: “I believe Tony scores extremely high on the three primary dimensions of consideration for this award: (1) Research contributions; (2) Service to the field and [Society for Mathematical Psychology]; (3) Mentorship of younger members. First, we observe that the field of scientific psychology has recognized Tony’s manifold contributions with a long list of awards, too many to recount here, but including a Woodrow Wilson Foundation Fellowship, a Fulbright Study Grant, and a number of fellowships in various scientific societies. Second, his research has attracted extramural support over many decades, many of these in collaboration with scientists around the world. Third, one feature of Tony’s career that supersedes that of virtually anyone else in the field, is the interdisciplinary and indeed, international nature of his research. [...] In each of [his] positions, he has had extensive mentoring roles, for young faculty, graduate students, and postdoctoral fellows.”

The award decision was made in early June of 2021. Sadly, Professor Marley passed away on June 14, 2021, before he could be informed of the award. He was 81 years old.